View Cart (0)
All of your pest control, agricultural and gardening needs 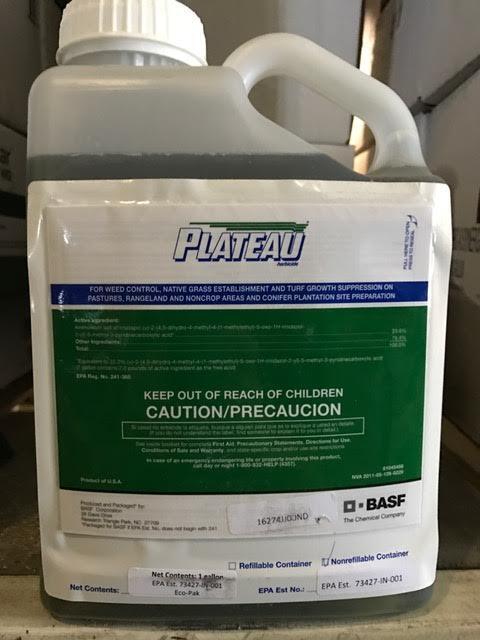 PLATEAU herbicide is one of the most flexible herbicides available, allowing you to achieve multiple objectives, depending on your specific needs. PLATEAU can be used on rangeland (government), conservation land and non-cropland areas, including railroad, roadside and utility. Whatever your challenge, PLATEAU offers the results you’re looking for.

PLATEAU is labeled for use with big bluestem little bluestem indiangrass and sideoats grama. But what makes it even more attractive as an establishment tool is there are a number of forbs which are tolerant to PLATEAU such as: blackeyed susan purple coneflower upright coneflower lance leaved and plains coreopsis lespedeza species partridge pea Illinois bundleflower purple prairie clover desmodium species and others.

PLATEAU can be applied either preemergence or postemergence. However a postemergence application is the method of choice in most situations. Refer to the label for specific recommendations.

PLATEAU Herbicide Plateau herbicide can be effective in providing the weed control and can be helpful in making the green turf areas more high lightened. Plateau is termed as an imidazolinone herbicide which is effectively applied on PPI, EP, PRE or POST to control the growth of grass. Plateau herbicide also makes notable contributions in controlling the cheat grass before the seedling. The damage is very minimum in these types of grasses hence the use of such grasses is at maximum rate on prairie grasses. The plateau product also works on pre emergent and post emergent grasses.

The active herbicide ingredient ranges from 23.6 % ammonium salt to imazapic.